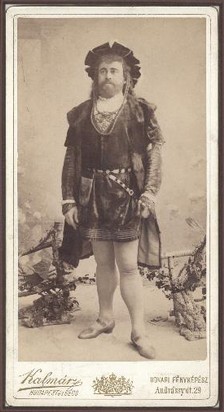 Giulio Perotti was born on 13 March 1841 in Ueckermünde. He was born Julius Prott and came from humble parentage. After his school education the young Julius went on to do an apprenticeship in shop keeping in Stettin where his musical talent as a tenor singer was recognized and supported by his uncle. Soon it was possible for him to study at the Stern Konservatorium in Berlin. After this he was able to further his qualification through talent and hard work with Pietro Ramini in Florence, with Francesco Lamperti in Milan, with the italian pedagogues Corsi and Deck-Servani and also with Gustave Roger in Paris. In 1863 he started his international career at the opera house in Breslau which over the following 30 years enabled him to perform in some of the biggest theatres and concert halls in Europe. He made guest appearances at all leading German concert halls and went on to give guest performances in Budapest, Florence, Genoa, London, Constantinople, Madrid, Milan, Moscow, Rome, Torino and Vienna. He made multiple visits to North America where he performed in the major concert halls in Boston, Chicago and New York. His most important artistic performances developed his heroic vocal field as Raoul in the “Hugenotten” by Meyerbeer, as Arnoldo in Rossinis ”Wilhelm Tell” and in Wagner-Repertoire (Lohengrin, Tannhäuser, Rienzi, Siegmund, Siegfried). His last performance in Budapest Opera is particularly remembered.

From 1892 Perotti was member of the Budapest Opera and at Christmas 1900 he decided to retire. He was celebrated by the people of Budapest who chosed Perotti as their favourite tenor. The director of the Royal Opera house from Beniczky wanted him to stay for longer, but even the fee of 300,000 gelders for 8 months together with a famous Hungarian medal “The Iron Cross” could not persuade him to change his mind and Perotti finally ended his career. Alongside his music he had nurtured another passion. From 1879 he had owned a plant nursery in Trieste and was internationally famous for his rose collection. The famous tenor Giulio Perotti (Julius Prott) died on the 28 Febraury 1901 in Milan.